Following Stamford Squash Club’s success in the Peterborough District League in which all three teams gained positions in the top three in each division, a tour to Edinburgh over the weekend of 19th – 21st

Matches were to be played against the Edinburgh Squash Club on the Saturday, and following a rest and relaxation period overnight in Scotland’s capital (aka “a night on the town”), a further series of doubles games on Sunday before returning to Stamford.

All places on the tour were filled

on Friday morning for the three-and-a-half-hour journey to Edinburgh.

Karen Cozens has supplied a superb banquet for us to enjoy on the way up! The 2 organisers Dave Spooner and Lawrence Ball did all they could top make it an entertaining journey splitting the 16 of us into 2 teams – the competitive nature of us all had started!

Once we arrived at Edinburgh, there was bowling arranged and a few other competitive games, so it was a quick look at the view from the hotel and then straight back out! 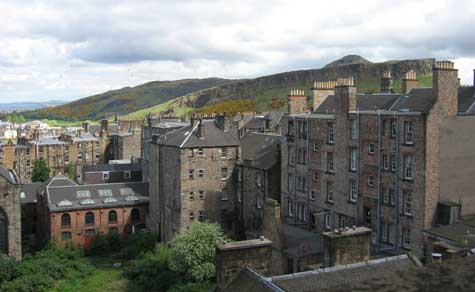 First off was the bowling, with the 2 teams – there was a competitive match between all, with Jason Rudkin winning the fastest speed just short of 25mph.

Next up was a bit of light entertainment, Air Hockey, Dancing, Shooting and more….

Later on that night Paul wonders if his training regime is such a good idea. Anyhow after

managing to get back to the hotel it was a day of squash to follow.

While Stamford may well punch above its weight in the Peterborough District League, the opposition north of the border proved a little tougher. The excellent facilities of the Edinburgh Squash Club were more than matched by both the hospitality and the high levels of skill demonstrated by its squash playing members.

When play commenced on Saturday, in what turned out to be an indication of things to come, Stamford’s no. 1 Jonathan Hand went down in a decisive 3-0 victory to Edinburgh’s Simon Boughton, both players demonstrating superb levels of accuracy and inventiveness.

At No. 2 Alastair Gunn’s skilful and deceptive game achieved no better against Richard Snowden at 0-3, while Glynn Williams at No. 3, almost tasting victory at 8 points to 3 in the fifth game against Adam Ralston, saw his lead slowly whittled away to finally lose 10-9 for a slightly more respectable (for Stamford) 3-2 result to Edinburgh.

Paul York, at No. 4, produced his usual flashes of brilliant and quicksilver play but failed to clinch the fifth against Graham Lind – another closely fought 3-2 to Edinburgh.

At No. 5 Simon Barker’s hard cross court drives and blistering boasts won him no more than a 1-3 defeat at the hands of Edinburgh’s Charlie Robertson, while brother Richard Barker at No. 6 achieved a slightly better 2-3 against Richard Melliso.

Six games played and only three near-misses for Stamford – the pressure was building up for the remaining ten to achieve a win.

At No. 7 Martin Brewin’s unconventional game of lobs, back wall boasts and outrageous deception finally achieved a 3-2 scoreline against David Ireson – Edinburgh 6, Stamford 1 – was the tide turning?

Peter Hand, on at No. 8, while failing to keep the winning streak going, did achieve 2-3 against Dave Shaw in this the first of two matches played, heroically achieving a 3-2 win in his second match, this time against Les Wilson.

At No. 9 Dave Spooner, while taking Eric Hogg to a fifth game with his hard left –handed floor-skimming cross-court drives, failed to close his opponent out; another 3-2 to Edinburgh.

Lawrence Ball at No. 10 achieved no more than one game against a determined Bruce Johnson; 3-1 to Edinburgh, while Ian Burnham at No. 11 fared even worse against a confident Ashley Mears: a 3-0 result to Edinburgh; the tide was turning back!

Finally, Ferlin Barnard, benefiting from his intense training regime during the weeks prior to the tour, achieved a well-deserved 3-2 against Edinburgh’s Keith Barwell.

The final result for the day.

Squad members Tim Prior and Jason Rudkin, although not playing because of injuries gamely supported their team from the balcony, so with a total of 15 games played Edinburgh won 11 and Stamford 4; certainly a decisive win for Edinburgh, but with 8 of the scorelines at 3-2, clearly a hard-fought tie.

After hard squash games – some had a snooze – they will remain nameless, though pictures tell no lies! AND look what it says on his t-shirt, — PARTY!!

The local drinking establishments were waiting for us and so a tour of the city followed….

The following day doubles game was played by all – and cracking matches resulted without too many injuries!!

After lunch it was time to leave Edinburgh and head back to Stamford but a great time was had by all – much due to the hospitality of our hosts at Edinburgh Sports Club!

Finally, as mentioned earlier in the report – we were split into 2 teams and the photos taken at the beginning really did show who were going to win all the way along……
– the team that know how to position themselves for a photo!!